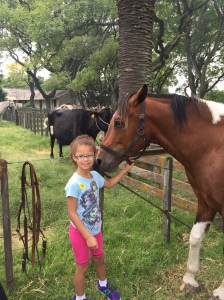 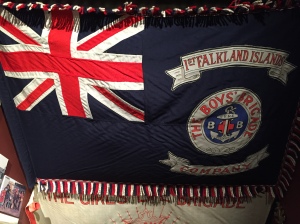 The Big Trip is going well and we have been having a great time—we’ve seen amazing sights, met great people, and had some wonderful experiences.  Monday was another “At Sea” day and I got up early and tried out a TRX Suspension class.  I was one of three people in the class and it was fun to get to try out something new.  It was a pretty good workout and I think I would like to do it again.  The girls spent the morning at the Kids Fun Zone and met some new friends.  Most of the other kids in the club spoke Portuguese so they said that a little bit of a hard time communicating.  Jared went running and I took a Line Dancing class.  Line Dancing is interesting when you have the added challenge of keeping your balance on a wavy ship. It was a lot of fun and the dance floor was packed with all kinds—young, old, women, and men.  In the afternoon we spent some time swimming—the main pool was open since the seas were a little calmer.  We watched a mini Maroon 5 concert on the Big Screen called “Live at Home”—it was really good and could have been longer! J

Tuesday was our first port of call—Buenos Aires, Argentina.  We went on a tour of the Recoleta Cemetery which was pretty interesting—they have amazing tombs/crypts—and Eva Peron is buried there.  From there we went to the countryside through the rolling grasslands called the Pampas and ended up at a ranch called La Mimosa.  It was rainy so we didn’t get to see the horse demonstration but did see some nice dancing by the Gauchos (Argentinian cowboys) and there was a major meat fest served to us for lunch—it was kind of like being at a Brazilian or Argentinian steak house.  I tried the pick the smallest steak and it still filled up my entire plate—needless to say Jared and I both had more than enough to eat.  The kids chased around dogs, peacocks, chickens, and petted the horses.  We met a nice family of six who are from Colorado and they are actually doing a family sabbatical too–but for an entire year—so cool!  They were on our cruise as well and their kids were around Lilli and Bella’s ages so we have had fun hanging out with them.  We watched another movie that night on the big screen with our new friends called The Hundred Foot Journey.  What a great movie—I loved the message of perseverance and staying true to yourself.   The kids actually watched the whole thing and seemed to like it too.  The journey to Buenos Aires was on the Rio de la Plata which is the widest estuary in the world.  It grows from 30 to 137 miles wide and special Recalada Pilots joined the ship and helped us navigate the narrow channels.  I swear I could feel the boat scraping along at some points. We navigated the same river to get to Montevideo, Uruguay.

Wednesday we landed in Montevideo (Pronounced like Montay Vi-dayo) and took a tour of the city and went to another ranch.  Our city guide definitely need a Red Bull—Bella and I kept nodding off while he was talking.  He was very knowledgeable but needed some pep in his step.  We went to an Estancia (ranch) called La Rabida—which was a wonderful experience.  La Rabida is a working ranch that is meticulously maintained and it was a family affair.  The grandmother, her sons, granddaughters, and great grandson took wonderful care of the entire tour group.  We had wonderful food cooked over an open fire in the traditional way—beef, pork, chicken, and vegetables.  Each place serves local wines too and they are all really good.  After lunch there was another dancing demonstration.  For those of you that are Shrek fans—the Puss in Boots character was definitely modeled after Argentinian and Uruguayan dancing—the boots, the billowing pants tucked into them, and the mode of dancing were the same.  It was sort of hard to keep the vision of PIB and Antonio Banderas’ voice out of my mind while watching the dancers. J

We spent a few more days at sea and took Spanish classes, listened to port lectures, went spinning, Jared and Lilli listened to a lecture on astronomy, watched movies and the best part was when we celebrated Jared’s birthday!  Julio, our cabin butler, decorated our door with a birthday sign and balloons and we celebrated at dinner in the Italian restaurant on board.

Our next stop was the Falkland Islands (or called the Malvinas if you are South American).  It was a rainy, rainy day and the wind was strong.  We went on a penguin tour and saw a colony of Gentoo Penguins after a boat ride and a bumpy off-road trip over the rocky terrain.  There was a King Penguin hanging out on the beach by himself—he was molting and couldn’t swim to catch up to his friends yet so he was having some quiet reflection time.  The Gentoos were anything but quiet and could definitely use a bath.  The eau de fish was overwhelming and we tried to get upwind as quickly as possible.  They were very cute and there is nothing better than a penguin walking around with their wings sticking out behind them.  We then went into the town of Stanley and had lunch at a traditional British Pub and a pint.  There was a very good museum in town and we spent time there learning about the Falkland War and Antarctic exploration.  One of the most interesting things at the museum was an actual Antarctic shed used to house explorers and workers.  It was tiny and housed 4-8 people on average—very close quarters but a badly needed shelter in such a harsh environment.  Lots of artifacts and pictures of famous Antarctic explorers such as Amundson, Scott, and of course Shackleton.  All tough guys-amazing!

We spent the next few days on some rougher seas and much colder temperatures (aren’t we supposed to be following the sun?!) and long days of daylight.  The sun rose around 5am and set after 10pm.  It was endless summer…..and hard to get kids to bed – “but Mommy—it is still daylight outside!”J   The rounding of Cape Horn was a cool experience—it was very windy and cold—but the sun was out so it seemed a little warmer than it actually was (around 40 degrees).  The kids were with their friends sitting underneath some deck chairs with a comforter wrapped around them to stay out of the wind.   We all have certificates now stating that we have rounded Cape Horn—can I use mine to help me get a job when we get back?  We cruised through the Straits of Magellan and saw many glaciers.  The glaciers are disappearing at a very rapid rate—it’s a scary sight to see how much they have melted first hand.

Our next stop was Ushuaia, Argentina and we went on a harbor cruise which reminded me of a kayak tour I took with my friend Aletha Noonan in San Diego this fall—lots of kelp beds for the sea lions and birds to eat.  The cormorants and sea lions were plentiful and there were lots of little sea lion pups.  Our final stop before our ultimate destination was Punta Arenas, Chile.  We went to Club Andino and took a chairlift up to the summit of a mountain and then hiked down.  Isabella led the hike and was a few yards ahead the entire way.  It was beautiful and reminded us of the mountains in Colorado.  We went into town and had lunch at a traditional Chilean restaurant and had our first Cerveza Austral—which was very good!  Austral means south vs. Boreal which means north.

Jared’s birthday present was a behind the scenes tour of the ship-which was awesome.  We saw the kitchens, the anchor and bosum area, and the bridge–a floating city basically and very well run.  The cruise finished in Valparaiso, Chile and we participated in a day tour which included a wine tasting, Paso Fino horse demonstration and lunch, and a city tour of Santiago, Chile.  The girls were wondering what we had gotten them into with the 8:30am wine tasting (frankly, we were wondering too!) and they forgave us quickly when we arrived at the ranch and spent time with the horses.  The city tour was good and gave us perspective on Santiago which is at the northernmost tip of the Andes Mountains.  We were very thirsty during the city tour and bought some bottles of water from a guy on the corner with a cooler full of cold drinks.  We hadn’t quite figured out the exchange rate in Chile yet and got swindled—we paid $14 for those two bottles of water—best water EVER!  The “watermark” became our measure of whether something was cheap or expensive.

Stay tuned for our next post on our time on our own in an apartment in Santiago, Chile—a beautiful city!

4 thoughts on “Week 2 on the Big Trip: Golden Princess”