Country Count from the beginning of the trip: 7 = Brazil, Argentina, Uruguay, The Falkland Islands (Malvinas), Chile, Peru, and Ecuador

We flew to Quito, Ecuador and stayed in the city for two nights.  The highlight of the airport in Quito were the video screens on the faucets in the bathroom–handwashing and teeth brushing challenges for children solved! 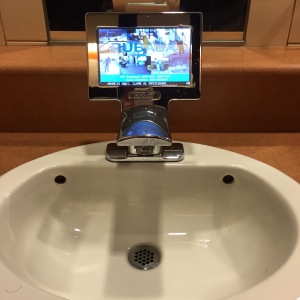 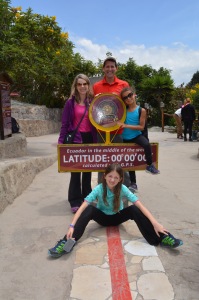 We noticed right away that Quito was generally well developed especially around the airport and into the city—a major highway had just been built which made our trip to the Hilton Colon very easy.  It was high altitude again in Quito around 10,000 feet and very hot in the sun.  We had a great tour guide, Giovanni, who was extremely passionate about Ecuador and showed us around his beautiful city.  We enjoyed seeing the cathedrals with altars and paintings covered in gold, the main square in the older section of Quito, and the Presidential residence (he was in Costa Rica at the time and sent his regrets that he wasn’t able to have tea with us. 🙂  We went to the Middle of the World Museum and spent time at the site of the equatorial line and watched a few experiments in action.  Water really does swirl counter clockwise in the northern hemisphere, clockwise in the southern hemisphere, and drains straight down right on the equatorial line.  After we visited the Middle of the World museum we went to lunch at a restaurant/art gallery called El Crater—a beautiful former private home that sits on the edge of Pululahua, an extinct volcano. The views were amazing and we ate lunch with clouds swirling all around us.  Interesting fact; not all of the volcanoes in Ecuador are dormant or extinct—in fact there are 26 volcanoes and a high percentage of them are still active.  Ecuador also has some of the highest mountain peaks in the world and is known for having many successful climbers—Mt. Chimborazo is 20,000 feet and is designated as the highest peak above Earth’s center.  We might have to head back to Ecuador to climb it someday!

The next day we were up by 4:45am to catch a ride the Galapagos via Guayaquil. When we got to Guayaquil, which is located on the west coast of Ecuador, we switched planes and flew a short distance to San Cristobal Island, one of many islands in the Galapagos. The immigration rules as you enter the Galapagos is quite stringent.  They check carefully to ensure you are not carrying any seeds, fruit, eggs or any other biological substance that could change the makeup of the islands. About 20 minutes before we landed, the flight attendants went through and opened all of the overhead compartments and sprayed bug spray onto all of the luggage—which also ensured all of the passengers got a little shower of insecticide as well. It was actually a little scary and without warning.  I wondered if any passengers ever had any problems from it – for instance if they had asthma or any other breathing conditions.  They should have at least warned us before getting on the plane that this would happen.

Our bags were checked again in San Cristobal so it took us more than an hour to get through the immigration area.  We boarded buses while our luggage was quickly loaded into the back of about three different Toyota pickups. The luggage met us at the dock along with about a half dozen very large sea lions. As we walked out into the sun and onto the wooden docks, we politely stepped around the fin/whiskered welcoming committee. The walkway was 6 feet wide and when you have 300 lb. sea lion lying in the middle of the dock you scoot quietly and quickly around them. The boat crew “shooed” them away by clapping their hands and giving them polite encouragement to get out of the way and the loungers waddled down the gang plank and slipped gracefully into the water–while barking loudly at each other seemingly saying “get out of the way”!

We all loaded up on what the crew called pangas—which are small inflatable reinforced boats that held about 14 people sitting on the sides and holding on to the sewn in handles as we bounced our way out to the M/V Santa Cruz—the boats look similar to a Zodiac.  It was about a 15 minute ride out to the ship and we all had an unexpected adventure as we held on tightly, bouncing over wave after wave on our way to our floating home base for the next few days.  Once we got to the ship, we pulled up along a platform located on the side and unloaded one person at a time as the waves raised and lowered us around the docking platform. When entering and exiting the panga boat, you lock arms with a crew person by grabbing a hold of each other’s forearms. This is not a fancy handshake for show, when the panga boat raises and lowers by 6 ft. while you’re trying to get off, you grip the crew persons arm without shame. You’re likely to get a little wet at any time due to the water splashing up on the loading platform. During most transfers, the kid’s feet barely touched the stairs of the boat and plank as the crew kept them weightless until they were securely in or out of the panga. This loading and unloading process happened at least twice a day so by the end of our trip we were used to it.

Our cabin was pretty small but it worked for the few nights were on the ship.  We had four berths—upper and lower bunks on either side of our galley style room, with one porthole window in the middle of the outside wall. I am still having nightmares about the bathroom-it was tiny, about 5ft square and very stinky—some problem with the septic system I would guess—ick!  We complained and they came to fix it–which I think entailed them pouring some sort of febreeze type liquid down the drains.  That worked for about 10 minutes and then the stench was back.  Besides that one negative everything was wonderful so we just tried to go into the bathroom as little as possible.  The kids were in heaven on the boat—they loved the cruises because they have been able to meet other kids and get a little freedom to roam around on their own.  The boat wasn’t all that big so there wasn’t a lot of room to roam and the kids got creative in finding things to do.  There were 8 kids on the ship and by the end of the trip they were all good friends and had a wonderful time together– Ariel, Ryan, Elizabeth, Caroline, Adam, Noah, Lilli and Isabella.  The kids had fun eating together at their own dinner time and found other ways to keep themselves entertained, like playing hide n seek, dancing in the ship library and eating Oreos from the ship’s snack store—I am guessing they went through more Oreos than normal that cruise.  We met some great people on the cruise—a group of Ophthalmologists from Miami—let us know if you need a referral 🙂 —and a family from St. Louis, MO that was also on family sabbatical and had been spending time in Peru. Christine and Larry’s girls were right around the same age and had a wonderful time playing together.  Jared and I had a great time getting to know the parents and other adults while the kids played.  It was nice to have a little adult time and we got a lot of great information about their travels and adventures and some good advice.

The island motto in the Galapagos is “Take nothing from the islands but memories.  Leave nothing behind but footprints.”  We experienced this firsthand during our afternoon stop at Punta Pitt on San Cristobal Island.  The islands are pristine—there is no permanent human presence on most of the islands and they are untouched, unspoiled, and naturally beautiful.  This time we had what they call a “wet” landing—which means they pull the Panga boats right onto the beach and we all jump off onto the surf.   It all felt very National Geographic—pulling up on a remote island with our cameras, sunscreen, and bug spray—clambering over the sides of the zodiac style boat and casually sauntering right next to an active colony of sea lions.  Ok not really casually sauntering—more like having to be pushed and prodded to keep moving because we were standing there mouths open, gaping at the amazing sea lions—especially the babies—they were so cute!  The hike on the island was rocky and mostly uphill and when we got closer to the top we were rewarded with views of the three species of boobies, which are birds found only the Galapagos—Red Footed, Nazca, and the most famous Blue Footed.  Each day we cruised to a new island or two and were rewarded with up close and personal viewing of amazing creatures—land and marine iguanas, hawks, Sally Lightfoot crabs (bright red in color), gulls, Shearwater birds, tortoises, more sea lions from alpha males to mothers to babies, mockingbirds, and Darwin’s famous Finches.  One day we went to the Charles Darwin Research Center where they have a turtle hatchery and where Lonesome George once lived—a 100 yr. old turtle who was the last of his particular species.  He was called Lonesome George because he never mated successfully with another turtle to produce offspring.  The girls had an especially good time on the island where are all of the tortoises lived—the tortoises were huge and moved very slowly and were just roaming randomly through the fields. While we were looking at tortoises we also had the chance to walk into a lava tube.  Lilli noticed a small owl sitting in a corner by the entrance—good eyes! 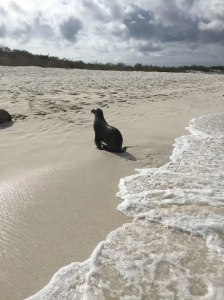 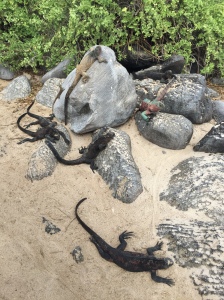 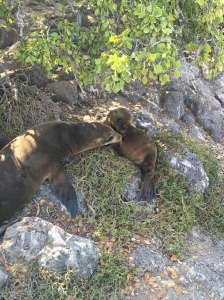 After goodbyes on Baltra Island, we boarded our flight to head back Quito.  That night we dreamed of all of the amazing creatures we had spent time observing—especially the baby sea lions who captured a special place in our hearts. 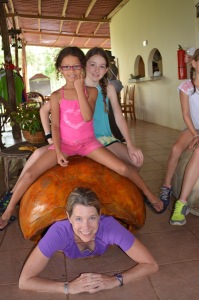 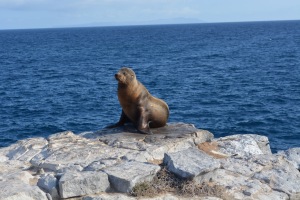 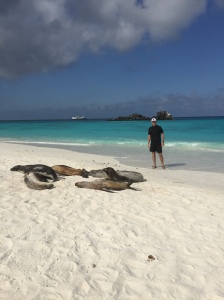 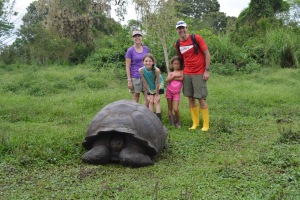 5 thoughts on “Week 6 on the Big Trip: Ecuador & The Galapagos”