We arrived on our third continent early in the morning on a misty, gray day—which pretty much describes the weather the entire week in Hong Kong. Hong Kong is a good place to transition into Asia—it is probably the most similar to a U.S. big city on the Asian continent—you can get many different types of food, and the shopping is outrageous—every store you can imagine—the ones you know and new ones that you haven’t heard of before and wish they had at home. Signs are in English as well as Chinese which makes it fairly easy to get around. Jared had business to conduct in mainland China so he left us for a few days at Disneyland Hong Kong. The park was very large and quite empty because Chinese New Year had just ended and everyone was back to work/school. We had a great time visiting Minnie and Mickey while Jared went to work – some rides and shows were familiar and others were very different. We went on Space Mountain, Dumbo, Saw Lilo and Stitch, Toy Story Land, and the favorite ride of all time: Grizzly Mountain. Grizzly Mountain was an especially fun roller coaster where you rode around an old west/gold rush type town and there were bears at various points getting into mischief—one bear set off a load of dynamite which promptly stopped the train of cars and sent them shooting backwards on the track—very unexpected and very fun! We stayed at the Disneyland Hotel and enjoyed the garden maze, swimming pool, watching Disney movie after Disney movie in our room, and the breakfast buffet. The girls are always very excited for breakfast buffets and love to pick out their meal from the wide assortment of eggs, meat, yogurt, cereal, baked goods, and fruit. Isabella especially loves her breakfast buffets and is in the process of learning how to take only what you will eat. Sometimes her eyes are bigger than her stomach. 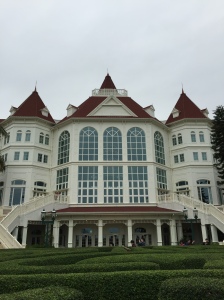 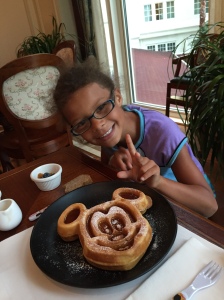 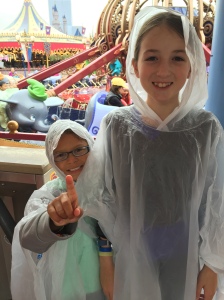 Jared rejoined us after a couple long days in China and we moved to the Intercontinental Hong Kong, where the girls began their love affair with Intercontinental Hotels and would like to stay in one in every city. (We have stayed in three so far and it really has been a fantastic experience!) Luckily we found the right hotel the first time as there are actually two Intercontinental Hotels in Hong Kong that are within blocks of each other. One of the first things we noticed on the island was the density of people—it is CROWDED everywhere you go—which was a big change from Australia and especially from New Zealand where the sheep outnumber the people. We walked most places and found that we needed to factor in the density of the crowds to our travel time. The waterfront of Hong Kong Harbor was very lively and we enjoyed the cafes and restaurants with great views of the harbor and skyline. The Science Museum was fun and interesting and contained some great exhibits on space exploration and the technology used by the astronauts in some of the Apollo missions. We also watched a National Geographic documentary while at the museum on what China is doing to conserve the Giant Pandas with a focus on breeding programs and then releasing the pandas on nature reserves.  The keepers try to keep the animals wild by limiting human exposure to the point where they put on giant panda suits covered in panda smell when they have to be in close proximity to the pandas—apparently making the pandas think they were the same. Not sure that would actually work but it was pretty entertaining for us to see these people walking around in furry panda suits. We happened to be in Hong Kong over St. Patrick’s Day so we enjoyed going to the 1st annual St. Patrick’s Day parade organized by the Irish Consulate. We rubbed elbows with many expats from Ireland, England, and other countries while watching the parade interlaced with local flavor. A couple of Chinese Dragons were included in the procession along with the traditional bagpipes and Irish dancers. 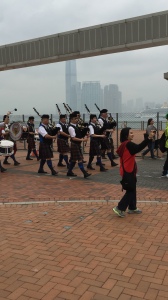 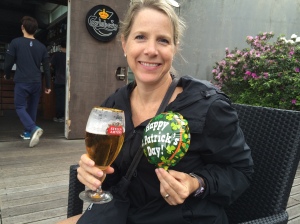 We planned on going to The Peak, one of the highest mountains in HK, but the fog and clouds were so thick that it seemed useless to make this tourist-required journey. Jared insists that he is to blame for the foggy, rainy weather in HK and he has visited almost 10 times and has only seen the sun once. Instead of ascending into the mass of clouds we wandered around the downtown and came across an amateur dance competition and a local band playoff. Since it was Sunday, the pedestrian skyways are filled with Filipino nannies on their day off. They brought elaborate picnics and laid out food and drink on their blankets and happily chatted the afternoon away—it looked like great fun!

We also saw a movie in a theater, Cinderella on opening weekend. They show some movies in English and we luckily found the theater hidden in a very tall building in a busy shopping district just in time. We walked by it about four times before finding it. Jared and I both did some running in Hong Kong and even found a few hills. I ran along the waterfront and saw a couple of guys getting in the harbor to swim—wow. There wasn’t one iota of desire in me to get into that nasty harbor water with lots of questionable items floating in it. The girls consistently tried to identify the questionable items every time we walked on the waterfront—“Ewww, Mama—WHAT is that? A dead fish? Why is there a tire floating in the water? Is that a squid? What is that white thing that looks like a weird balloon? (Gross…. and explanations I did not care to get into at ages 7 & 11!). HK Harbor makes Lake Michigan look like a pristine alpine lake, therefore swimming for me was contained to our hotel rooftop pool.

Our last night in Hong Kong we enjoyed meeting former work colleagues of Jared’s, Candy and Sandy. We met them out for drink and then continued onto dinner with Sandy, whom Jared has known for many years from working at Publications International Limited. We had dinner outside along the misty, foggy waterfront and enjoyed our final evening in Hong Kong. It is a very cool, cosmopolitan, sophisticated city and we enjoyed our time there.

Next up Vietnam—which we began our trip on Cathay Pacific, part of our One World Alliance Around the World Air Ticket. 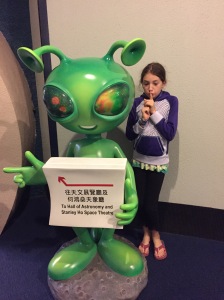